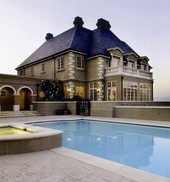 An upscale Silicon Valley community home to a population of around 30,000, Los Gatos, California, is in the San Francisco Bay Area in the foothills of the Santa Cruz Mountains. Los Gatos residents are mostly affluent; the area had an average median annual household income in 2007 of more than $116,000. Because most residents are on the higher end, so too is Los Gatos real estate, most of which consists of single-family residential homes, with older, smaller homes near the downtown region and larger, specially built new homes in the city's outlying areas. As with other cities in California, this city's market has taken a downturn in the past couple of years as the national economy has tanked, spurred on by the subprime mortgage crisis.  Prices here have plunged, and the number of troubled homeowners has skyrocketed, as has the subsequent number of foreclosures in Los Gatos, proving that even wealthy neighborhoods are not immune to the effects of a recession. But things are beginning to look up for the city, and prices are bouncing back up, if only slightly.

According to statistics from the Santa Clara County Association of Realtors, in the month of September there were 190 Los Gatos homes for sale, 57 of which were new listings for the month. This inventory was up from a year ago, when inventory was just 174, but it was up by just two from August's inventory. Homes spent an average of 99 days on the market before selling in September, a bump up from a year ago, when that figure stood at just 72 days, and up substantially from August's average of 68 days. There were 33 homes sold in Los Gatos in September, an improvement over figures from a year ago, when just 22 sales were made. August saw volume of 26 homes. The average price rose slightly year-over-year, from $1.15 million to $1.33 million, but the median price actually declined a bit on an annual basis to $1.13 million from $1.18 million.

The Los Gatos condo market saw more signs of struggle, as prices continue to stagnate and fall, bad news for sellers but signs that it could be a good time for buyers looking for a bargain to make their purchase. There were 15 new condo listings in Los Gatos in September, compared with 13 a year ago and 15 in August, bringing the month's total inventory to 54, up annually from an inventory of 46 last year. The number of days condos in Los Gatos spent on the market before selling remained basically unchanged from a year ago, to 74 days from 71 days. There were eight condos sold in Los Altos in September, compared with six a year ago and six in August, a slight improvement. Condo prices continue to fall on a year-over-year basis. In September, the average price was $672,500, down from September of 2009's figure of $753,000. The median price, meanwhile, fell as well, from $741,500 to just $694,000.

Search all Santa Clara County homes for sale and foreclosures.